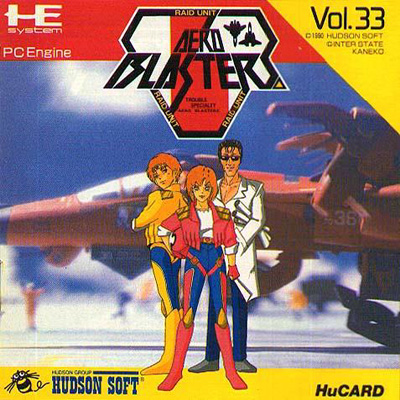 Air Buster is a horizontally scrolling shoot 'em up video game produced by Kaneko and co-distributed by Namco for the arcades in 1990. It was subsequently ported to the PC Engine/TurboGrafx-16 (under the title Aero Blasters) and for the Mega Drive/Genesis in 1991.

In Air Buster, the player controls a fighter jet also designed for space travel and shoots enemies, collects power-ups, and defeats bosses to advance levels. As a console game, Air Buster had the distinction of being two player simultaneous, which was rare among side scrolling shooters on home consoles at the time.

Players choose between one of the two Blaster fighters through scrolling six stages. The Blaster fighters can equip one of seven weapons. The weapons include the Striker weapon which adds additional firepower through vertically aligned Options, the Reverse shot which fires two diagonal shots from the rear of the ship, the Six Way Shot which fires semi-automatic shots in six directions and the Homing Shot which tracks enemies all around the screen.

The other three weapons are Missile based which vary from Red straight-firing Rockets and Green Homing Missiles. There is also the Border item which surrounds the front of the ship, keeping it from crashing into foreground objects. The only other Items include Power-Ups which increase the ship's standard shot power and Bonus Points that appear in the sign of Dollar signs.

In the year 2021 a mysterious orbital space weapon appears and assaults the nations of the Earth. The players control the pilots Mike or Holly who are a part of the Trouble Speciality Raid Unit whose mission is to stop the invasion.