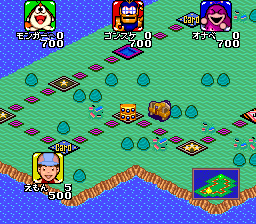 21 Emon ~Mezase! Hotel Ou~ (２１エモン めざせ！ホテル王) is a game, developed and published by NEC Home Electronics, Ltd., which was released in Japan in 1994 for the NEC PC Engine / TurboGrafx-16.

Naturally a manga/TV anime tie-in, 21 Emon is one of those Japanese style board games that have never really made a big impact in the west. Four players (any combination of human and computer) take it in turns to roll dice and move around the isometric board, landing on various event squares. The ultimate aim is to build as many hotels as you can and make more loot than your opponents.

While it can be interesting if you've never played a game like this before, ultimately you really need two things to enjoy it: 1. A group of friends, and 2. Japanese language skills. Without those, and despite its adequate presentation and jolly music, it isn't likely to hold your attention, and there are better board games on the PC Engine to bluff your way through (Dragon Half on CD for example). As such, I haven't rated this game, feeling that would be a little unfair.