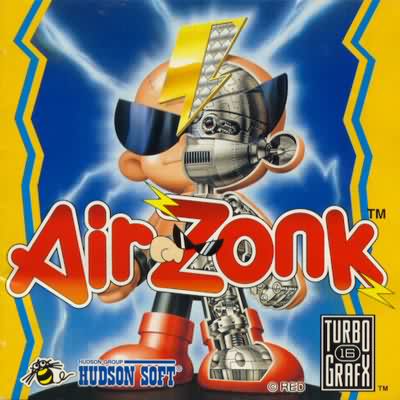 Air Zonk (also called PC Denjin Punkic Cyborg!/PC Denjin／Completion○／Clear× (PC電人／補完○／クリア× PC denjin/ hokan ￮/ kuria ×)) is a video game, a side-scrolling shooter released for the TurboGrafx 16 console in 1992. It was developed by Red Company and published by Hudson Soft. Air Zonk was an attempt to update the company's image via a modern, punkish character called Zonk, who bears a purposeful resemblance to the TurboGrafx-16's caveman mascot, Bonk.

Air Zonk is similar to other scrolling shooters, but includes companion characters. Artistically the game is lighthearted, featuring humorous bosses such as a sentient garbage heap and an anthropomorphic boat. The gameplay centers around the effective use of shooting and bombing to complete a stage. At the start, the player may pick a companion character to team up with to perform special attacks, limit themselves to using the designated companion characters for each level, or opt out of using companion characters altogether. Each companion character, or friend, can only be used once. Air Zonk takes on the distinct visual style that is sometimes called "cute 'em up". There are three difficulty levels: sweet, spicy, and bitter.

Zonk can charge his shots, which allows him to fire a more powerful attack. Charging longer causes Zonk to drop a bomb, which damages all enemies on the screen. Zonk can also acquire seven types of power-ups, each of which can also be charged for a unique special attack. As usual for scrolling shooters, whenever Zonk acquires a new power-up, he loses the current one. If Zonk is hit while he has a power-up, he loses the power-up but does not die, except in the case of the mini-Zonk power-up. The mini-Zonk power-up also differs from the other power-ups in that it cannot be charged, and can be found in both florets and random enemy drops (other power-ups can only be found in florets).

Zonk starts each stage alone and with no powerups. He must collect seven smiley-faces, the last of which will appear in giant form with sunglasses, in order to get his friend to join him. The friend initially acts as a Gradius-style support which follows Zonk around shooting projectiles. If the player collects another seven smiley-faces, Zonk and the friend will merge into a hybrid form, granting a new attack and 20 seconds of invulnerability. This new attack cannot be charged, and Zonk cannot drop bombs while in hybrid form. Once invincibility expires, if Zonk is hit he will revert to normal form and his friend will leave, though he retains whatever power-up he had before changing to hybrid form.